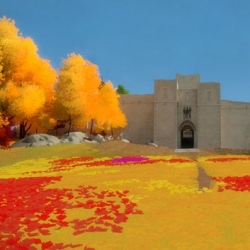 Google is apparently working on a virtual reality headset that, unlike its Cardboard platform, will have no need for a smartphone, or a PC or gaming console. The device will sport a display, cameras, and processors from independent company Movidius for head tracking, the Wall Street Journal is reporting.

This headset would be in addition to the previously reported plastic Cardboard headset Google is also said to be working on. That one could be shown off for the first time at the Google I/O developer conference later this year.

The interesting thing here is that Google seems to be very willing to experiment with new form factors for VR. Google came out with Cardboard at I/O in 2014. That certainly felt like a bold move. But it has become something that other companies building virtual reality or augmented reality hardware, like Facebook and Microsoft, must bear in mind. Now more than 5 million Cardboard headsets have been shipped, with 5,000,000 to 10,000,000 Cardboard app installs recorded by the Google Play Store.

Last year Google came out with the Pixel C, an Android-based two-in-one from the team that built the earlier Chromebook Pixel laptop. It uses powerful magnets to attach the tablet to a keyboard, distinguishing it from Microsoft’s Surface. With today’s reports, it looks like Google is doubling down on research and development for a VR device even if the market is still immature relative to Android.