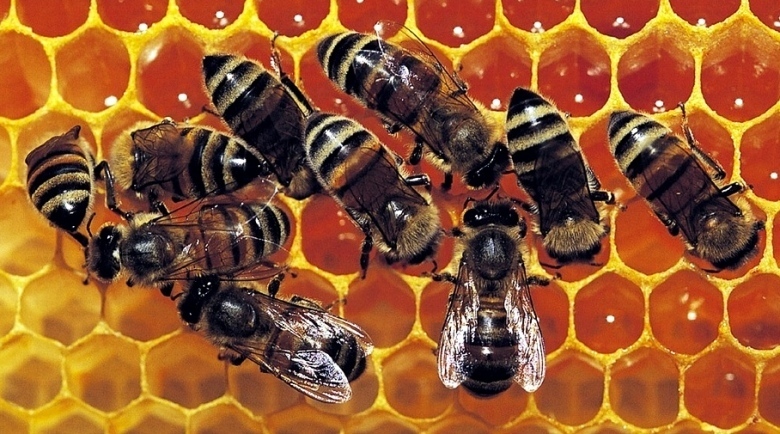 A small group of hive members do the bulk of the foraging; about 20% of the bees in a beehive account for 50% of the foraging activity, while their sisters relax at home. But their lifestyles aren’t permanent. If the busy bees disappear suddenly, the lazier ones will step up to take their place. Scientists figured this out, somewhat incredibly, by gluing tiny RFID tags to over a thousand honeybees.

(An RFID tag is the same miniature transponder that a vet might inject into your dog, that’s replacing barcodes on some merchandise and library books, and that makes your public transit card work.) Each beehive in the experiment had a pair of laser scanners over a walkway at its entrance. As bees passed through, they were recorded like items in a checkout lane. Using two scanners let the scientists tell whether bees were coming or going.

Paul Tenczar, a researcher in Gene Robinson’s lab at the University of Illinois, Urbana-Champaign, and colleagues at the university set up five experimental bee colonies. Each colony started with about 2,000 day-old bees, a subset of which were tagged. For the next month, the bees busily (it seemed) came and went, flying to nearby flowers and bringing back nectar and pollen for the colony.

Data from the scanners at the hive entrances revealed that the bees weren’t all doing the same share of work. In fact, only about 20 percent of bees accounted for 50 percent of the foraging activity. This was consistent across all five hives, the workers doing half the foraging ranged from 16 to 21 percent.