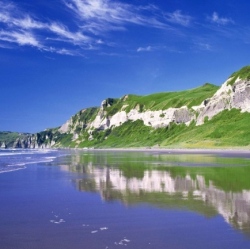 The nations of the world agreed years ago to try to limit global warming to a level they hoped would prove somewhat tolerable. But leading climate scientists warned on Tuesday that permitting a warming of that magnitude would actually be quite dangerous.

The likely consequences would include killer storms stronger than any in modern times, the disintegration of large parts of the polar ice sheets and a rise of the sea sufficient to begin drowning the world’s coastal cities before the end of this century, the scientists declared.

“We’re in danger of handing young people a situation that’s out of their control,” said James E. Hansen, the retired NASA climate scientist who led the new research.

The basic claim of the paper is that by burning fossil fuels at a prodigious pace and pouring heat-trapping gases into the atmosphere, humanity is about to provoke an abrupt climate shift.

Specifically, the authors believe that fresh water pouring into the oceans from melting land ice will set off a feedback loop that will cause parts of the great ice sheets in Greenland and Antarctica to disintegrate rapidly.

That claim has intrigued some experts who say the paper may help explain puzzling episodes in Earth’s past when geological evidence suggests the climate underwent drastic shifts. Yet many other scientists are unconvinced by some of the specific assertions the authors are making.

“Some of the claims in this paper are indeed extraordinary,” said Michael E. Mann, a climate scientist at Pennsylvania State University. “They conflict with the mainstream understanding of climate change to the point where the standard of proof is quite high.”

Despite any reservations they might have about the new paper, virtually all climate scientists agree with Dr. Hansen’s group that society is not moving fast enough to reduce emissions of greenhouse gases, posing grave risks. An agreement reached late last year in Paris seeks to cut emissions, but it is not remotely ambitious enough to limit global warming to the degree Dr. Hansen regards as necessary.

Even scientists wary of the specific claims in the new paper point to Dr. Hansen’s history to argue that his ideas need to be taken seriously.

“I think we ignore James Hansen at our peril,” Dr. Mann said.