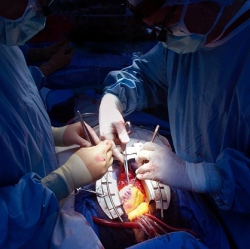 Working with the body’s soft tissue has proved difficult for robots because of how much it can squish and change during surgery. A new machine called the Smart Tissue Automation Robot (STAR) at Johns Hopkins University has overcome this obstacle and proven its ability by operating on pigs.

STAR consists of a robotic arm equipped with a suturing tool coupled with a 3D imaging system and near-infrared sensor that looks for fluorescent markers put along the edges of tissue by the researchers. The surgery is guided by an "autonomous suturing algorithm" specially developed to work with the system.

In tests, STAR was able to sew together severed pig bowels as successfully as human surgeons who participated in the study. Both in-vivo and ex-vivo tests were carried out.

In evaluating the success of the STAR system, its work was compared with that of five surgeons each having at least seven years of experience. It was also compared to three different kinds of surgical procedures: open, laparoscopic and robot-assisted, in which a surgeon guided a robotic arm.

In all cases STAR did as well as, or better than, the humans, although it did take longer to complete its operations than the surgeons in the open and robot-assisted procedures.

"No significant differences in erroneous needle placement were noted among all surgical techniques, suggesting that STAR was as dexterous as expert surgeons in needle placement in deformable soft tissues," write the researchers.

Simon Leonard, a Johns Hopkins University computer scientist who was part of the team that developed and tested STAR says the system is "the equivalent of a fancy sewing machine." There’s no word on when it might start appearing in hospitals or get tested out on humans, but at least we know that if aliens start using us as incubators, help might be a few mouse clicks away.

Leonard and his colleagues also point out that the goal of STAR isn’t to put doctors out of work. "The intent of this demonstration of feasibility in soft tissue surgery was not to replace surgeons, but to expand human capacity and capability through enhanced vision, dexterity, and complementary machine intelligence for improved surgical outcomes, safety, and patient access."