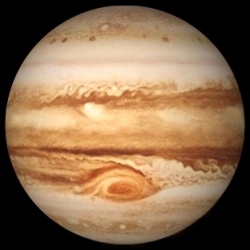 The Juno satellite, which left Earth five years ago, had to fire a rocket engine to slow its approach to the planet and get caught by its gravity. A sequence transmitted from the spacecraft confirmed the braking manoeuvre had gone as planned. Receipt of the radio messages prompted wild cheering at Nasa JPL in California.

"All stations on Juno co-ord, we have the tone for burn cut-off on Delta B," Juno Mission Control had announced. "Roger Juno, welcome to Jupiter."

Scientists plan to use the spacecraft to sense the planet’s deep interior. They think the structure and the chemistry of its insides hold clues to how this giant world formed some four-and-a-half-billion years ago.

Engineers had warned in advance that the engine firing was fraught with danger. No previous spacecraft has dared pass so close to Jupiter; its intense radiation belts can destroy unprotected electronics.

One calculation even suggested the orbit insertion would have subjected Juno to a dose equivalent to a million dental X-rays. But the probe is built like a tank with titanium shielding, and the 35-minute rocket burn appeared to go off without a hitch.

"Nasa did it again," said an elated Scott Bolton, Juno’s principal investigator. "That says it all to me. And I’m so happy to be part of the team that did that. I mean this team has worked so hard and we have such great people. And it’s almost like a dream coming true right here."

While the radiation dangers have not gone away, the probe should now be able to prepare its instruments to start sensing what lies beneath Jupiter’s opaque clouds. Tuesday’s orbit insertion has put Juno in a large ellipse around the planet that takes just over 53 days to complete. A second burn of the rocket engine in mid-October will tighten this orbit to just 14 days. It is then that the science can really start.

This will involve repeat passes just a few thousand kilometres above the cloudtops. The probe will try to settle old arguments over whether the planet hosts a solid core or whether its gases go all the way down to the centre in an ever more compressed state.

And it will look for the deep swirling sea of liquid metallic hydrogen that theory suggests is the driver behind Jupiter’s immense magnetic field and its spectacular auroras.

"I love that Great Red Spot. We see it evolving, and it’s been getting smaller ever since I first got amazed by it, which was when I was a child," he told reporters.

"The fact that it’s lasted so long – there are records of it going back hundreds of years – means that it must have fairly deep roots.

"It looks a little like a hurricane on the Earth but we know it can’t be working exactly like that because hurricanes on the Earth need an ocean underneath and feed off the liquid and then change when they go on land. At Jupiter, it’s all gas."

Nasa plans to run Juno through to February 2018, assuming any radiation damage has not made it inoperable by then. The performance of the camera, for example, is expected to degrade rapidly within a few months.

In line with the practice on many previous planetary missions, the probe will be commanded to end its days by ditching into the atmosphere of Jupiter.

This ensures there is no possibility of Juno crashing into and contaminating the gas giant’s large moons, at least one of which, Europa, is considered to have the potential to host microbial life.