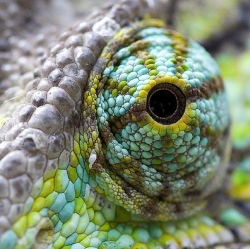 A species of chameleon small enough to easily perch on a match head has been discovered on a tiny island off Madagascar, a group of scientists has announced.

Adult males of the B. micra species grow to only just over a half-inch (16 millimeters) from nose to bottom, making them one of the smallest vertebrates ever found on Earth.

From nose to tail, adults of both sexes grow to only 1 inch (30 mm) in length.