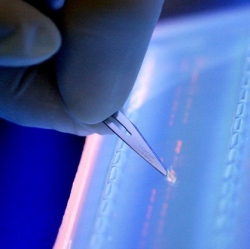 Dubbed Willow Glass, the product can be "wrapped" around a device, said the New York-based developer Corning.

The glass was showcased at the Society for Information Display’s Display Week, an industry trade show in Boston.

Besides smartphones, it could also be used for displays that are not flat, the company said.

But until such "conformable" screens appear on the market, the glass could be used for mobile devices that are constantly becoming slimmer.

The prototype demonstrated in Boston was as thin as a sheet of paper, and the company said that it can be made to be just 0.05mm thick – thinner than the current 0.2mm or 0.5mm displays.

The firm has already started supplying customers developing new display and touch technology with samples of the product.

The material used to make Willow Glass is the result of the firm’s glassmaking process called Fusion.

The technique is melting the ingredients at 500C, and then producing a continuous sheet that can be rolled out in a mechanism similar to a traditional printing press.

Corning unveiled Gorilla Glass 2 at CES this year, saying that it will make screens thinner This roll-to-roll method is much easier and faster for mass production than the sheet-to-sheet process normally used to make super-thin glass, the firm said.

In future, Willow Glass may replace the already widely-used Gorilla Glass, found on many smartphones and tablets.

At this year’s CES trade show in Las Vegas, Corning unveiled Gorilla Glass 2, said to be 20% thinner than the original product but with the same strength.

The first-generation of Gorilla Glass, launched in 2007, has so far been used on more than 575 products by 33 manufacturers – covering more than half a billion devices worldwide.

It was first spotted by the Apple founder Steve Jobs, who contacted Corning when the firm was developing the screen for its first iPhone in 2006.