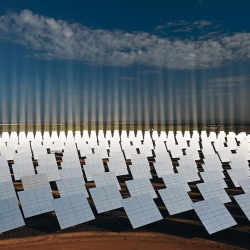 After a steady stream of bankruptcies, poor earnings reports, and canceled IPOs for clean-energy companies, this week Solarcity bucked that trend by announcing that it had filed the necessary paperwork with the U.S. Securities and Exchange Commission for an IPO.

The key difference between Solarcity and many other clean-energy startups is that it isn’t trying to take on incumbents with new technology. It makes money by deploying existing solar technology with a novel approach to financing.

Solarcity designs, installs, and maintains solar-energy systems fitted to homeowners’ roofs. Instead of asking for a big upfront payment, it leases the systems. As the panels produce power, surplus electricity is sold back to the local utility. Combined with the savings that come from using less power from the grid, this will typically reduce the homeowner’s electric bill by enough to offset the lease payments.

Aided in part by a rapid drop in solar-panel prices over the past few years, this approach has been a success. A market flooded with cheap solar panels from Asia saw prices drop by 50 percent last year. That has eliminated profits for many solar-panel manufacturers, forcing some, including a number in China, to declare bankruptcy or go out of business. But installing solar panels remains lucrative, and when solar prices drop, that helps Solarcity’s bottom line.

The company’s filing with the SEC isn’t public, so its financial details aren’t yet known. A recent analysis by GTM Research suggests that it’s been quickly increasing its market share, claiming 6 percent of the residential installation market in 2010; and 13 percent of the market in 2011, "more than double the next biggest player," says Shayle Kann, managing director for solar at GTM Research.

Some other energy startups have recently adopted the strategy of working with companies that make conventional technology, rather than trying to compete with them. Innovalight, acquired recently by Dupont, originally intended to make its own solar cells using a novel silicon ink. But faced with stiff competition from conventional silicon-solar-panel manufacturers in China, it found a new application for its inks; when added to conventional solar panels, the ink can improve the panels’ efficiency. So it sells its ink to solar manufacturers. Several other companies are developing technologies that fit neatly with existing solar-panel production processes. For example, Twin Creeks Technologies and 1366 Technologies are developing better ways to make the silicon wafers that form the heart of a conventional solar cell.

Most of the money being made in the solar industry doesn’t come from making and selling solar panels. In the case of some small residential systems, solar panels account for only 20 percent of the overall cost of a system. The rest includes the cost of electricians to install the panels and hardware to connect the systems to the grid. Most of that money goes to companies like Solarcity. Indeed, some established solar-panel manufacturers, such as SunPower and First Solar in the United States, are looking to survive by not only selling panels, but also building the systems and selling the power.

Solarcity is finding ways to expand the market for existing technologies—mainly solar panels, but also equipment for improving efficiency and storing electricity. It also addresses one of the big challenges with selling solar-panel systems to homeowners—the high upfront cost—and that’s allowed it to quickly increase its share of the residential solar-installation market.

The company is also innovative. It has developed new software management tools that allow it to manage thousands of unique installation projects, along with the large variety of permitting requirements, which vary between states, counties, and cities.

As the largest residential solar-power installer in the U.S., Solarcity’s scale gives it an advantage. But success is by no means guaranteed. For one thing, while it doesn’t compete with conventional silicon solar-panel manufacturers, it ultimately competes with conventional power plants, and it can only do that now because government subsidies offset some of the cost of solar-panel systems. Its dependence on state subsidies is the reason it doesn’t operate in all 50 states.

However, subsidies seem uncertain as governments look for ways to cut costs; in some places, such as California, subsidies are already declining. As it approaches its IPO, the company’s future may hinge on whether it can lower costs fast enough to outrun that decline, and survive without subsidies.