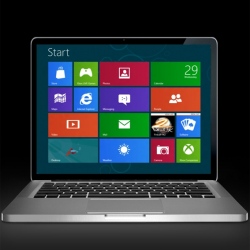 As a cruel trick on myself, about a month ago I installed Windows 8 on my main PC to see what it was like.

The answer is: abysmal.

I don’t think it’s an exaggeration to say that Windows 8 is the worst computing experience I’ve ever had. As a desktop operating system, it’s annoying, frustrating, irritating, and baffling to use. I’ve tried on many occasions to explain exactly why it’s so awful to use day-to-day, and most of the time, smoke starts pouring out of my ears. I thought it would be better to get down exactly what the issues are and why you should avoid it.

What it comes down to is this: Windows 8 is a tax on your brain. That dealing with it, day in, day out adds to your world being slightly worse in a dozen different but slightly irritating ways.

Windows 8 is really meant for tablets

Windows 8 brings a new kind of computing design to the desktop. Once called Metro (until Microsoft realised that Metro is also the name of a German supermarket), it’s a design motif that’s meant to be appropriate across tablets, mobile phones, the desktop, and eventually, televisions. To be fair to Microsoft, Metro is a decent way of poking at your computer with a finger. But when you have the flexibility and precision of a mouse, it makes no sense. In Metro Most of your screen is taken up with white space. Text is bigger, the buttons are bigger, the borders are bigger. There’s less information, more wastage. It’s a complete mess.