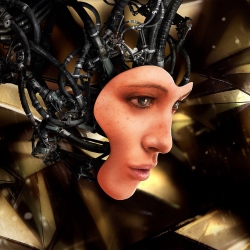 Controlling Devices With Our Mind
Expected By: 2017; embedded brain controls 2020

Science fiction and fantasy has long harbored visions of technology that could read our thoughts or otherwise meld with our minds. And we have already seen some small, but definite steps taken towards these ends. According to IBM, there will be widespread mental interactions with computers by 2017.

Man, Battlefield 3 looks nice. Real nice. But still, it’s for-a-game nice. Not yet say, Prometheus trailer nice. Video game characters have evolved far beyond the muscled Contra twins of yesteryear, but few gamers would have any problem deciphering today’s most advanced avatars from human actors. But this may not always be the case. In 2009, Epic Games founder Tim Sweeney predicted that gamers will interact with photo-realistic worlds in "10-to-15 years."

3. Smartphones As Powerful As The Human Brain
Expected By: 2023

Computers have already beat us at Jeopardy, so Skynet must be right around the corner, right? Well, maybe. According to renowned (but sometimes wrong) futurist Ray Kurzweil, computers need to achieve 10 petaflops (that’s 10 quadrillion calculations) per second in order to match the power of one human brain.

South Korea LOVES robots. Helpful robots. Teacher robots. Freaky robots. All kinds of robots. The government predicted back in 2007 that every South Korean home would have a robot at some point between 2015 and 2020 and robots will routinely handle surgery on humans by 2018. South Korea is so invested in the future on robotics that it has drawn up a Robot Ethics Charter to dictate the relationship between man and machine.

While the South Korean government is preparing for a world with robot teachers and robot surgeons, the US military has been investing heavily in robot warriors. This research has resulted in advanced predator drones which the military has effectively utilized around the world. As of 2006, The US army had developed around 20 remotely controlled Unmanned Ground Systems and 2,500 uncrewed systems deployed in active conflict.

While self-driving cars are under development by several companies, they haven’t yet found their way to local dealers. But as any student of the march of technology knows, where there is a will, there will be a way. So, when will we be able to buy vehicles (or step into an unmanned cab) and simply speak "drive me to the movies, Mr. Car"? Well, back in 2008, GM CEO Rick Wagoner predicted that self-driving cars would be commercially available in 2018.

In a similar prediction, cars equipped with Google’s much-heralded self-driving tech are rumored to start production in 2020. Neither of these are out of the realm of possibility.

In June of 2011, Nevada became the first state to recognize driverless cars (following a lobbying effort by Google). It is speculated that Google specifically chose Nevada so that the tech giant would be able to showcase driverless models at a future edition of the CES or Las Vegas Auto Show.