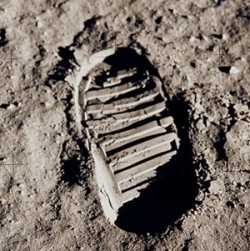 You can develop the billions of gallons of water that are on the moon and provide fuel for orbital and other space operations. (military and other wise). The fuel would be cheaper because it would be 22 times cheaper to bring it up from a gravity well that is one sixth the strength.

You can begin the industrialization and colonization of space. What was the advantage of Jamestown in America to England ? Not much. But the advantage of having colonized Canada and then the US made the difference in WW2. Canada provided vital supplies to sustain England and the US provided a lot of military support.

On the way to full space industrialization, if a country is in the lead in colonization then that likely translates to having more rockets and space capability. Those with the most colonies in the old world had stronger navies. A 13000 person moon base means hundreds of reusable Spacex falcon heavies and a lot of earth to moon space tugs. A nation now that has bases and people in islands tends to control the sea around and between those islands. If I have big moon base and all of the space infrastructure and transports that go with it, then I probably can control who has GPS or anything else in space. (Assuming that the other nations are behind.) I expect that Russia, China and India will step up if the US make this move.

The plan takes advantage of the nuclear cannon concept that I have thought of as a variant of external pulse nuclear propulsion and which Joseph Friedlander developed further. However, the plan could be adapted to using reusable Spacex launch vehicles and fuel depots to bring costs to a more affordable level than today (My nuclear cannon launcher concept would be very cheap for supplies but I recognize that this will not gain support in spite if being safe and technically practical).

I have reviewed several technologies that would make a permanent moon base more affordable and enable it to be built sooner.

The key is to aggressively start to build up the energy available and the level of manufacturing and processing of resources.

There is uranium and thorium on the moon. Those resources could be extracted and it could be cheaper and circumvents political roadblocks to getting project Orion started in the solar system. Build the project Orion systems on the moon. The fact that it cost more to lunar uranium than it would have for earth uranium avoids the fact that the Earth is filled with people who do not understand that external pulse propulsion can be made safe. Presumably the moon would have mainly very good engineers and science and math literate people. People who are willing to do bold things would be self selecting.