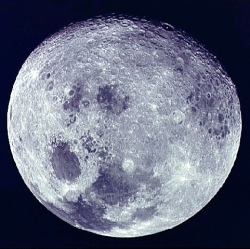 Water on the moon is nothing particularly revelatory. But a new study suggests that H20 on the surface of the Earth’s nearest neighbor comes from a most unlikely place: the Sun.

The research, which is published in Nature Geoscience, suggests that hydrogen ejected from the Sun’s atmosphere is carried towards the moon in solar winds. When it lands on lunar soil, it reacts with oxygen, producing water. To work that out, the researchers analyzed glass-like material brought back from the moon, and found evidence of hydrogen and oxygen molecules reacting within them.

A number of separate studies have observed water on the moon, but its origins have always been unclear. Some have speculated that water has been delivered to the chunk of rock via icy meteorites and comets—which are free to hit the celestial body because of its lack of protective atmosphere.

This new finding, however, reshapes that suggestion. While it’s not clear what percentage of soil on the moon may contain Sun-born water, it’s an important and exciting finding, because it could point to other similar airless bodies around the solar system also being home to water.