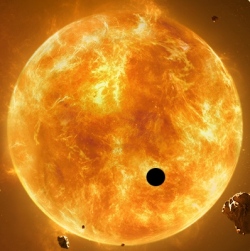 Planet Venus is set to move across the face of the Sun as viewed from Earth.

The more than six-and-a-half-hour transit, which starts just after 22:00 GMT (23:00 BST) on Tuesday is a very rare astronomical phenomenon that will not be witnessed again until 2117.

Observers will position themselves in northwest America, the Pacific, and East Asia to catch the whole event.

But some part of the spectacle will be visible across a much broader swathe of Earth’s surface, weather permitting.

Skywatchers in UK, for example, will catch the end of the transit at sunrise on Wednesday.

Venus will appear as a tiny black disc against our star, but no-one should look for it without the proper equipment.

Venus appears as a tiny black disc against our star Looking directly at the Sun with the naked eye, or worse still through an open telescope or binoculars, can result in serious injury and even blindness.

It is recommended people attend an organised viewing event where the transit will be projected on to a screen; or they can visit one of the many institutional internet sites planning to stream pictures.

The reason for the long intervals lies in the fact that the orbits of Venus and Earth do not lie in the same plane and a transit can only occur if both planets and the Sun are situated exactly on one line.

Once the latest transit has passed, the next pair will not occur until 2117 and 2125. Most people alive today will probably be dead by then.