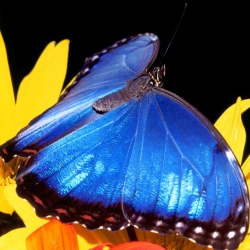 MIT physicists have managed to build a light-emitting diode that has an electrical efficiency of more than 100 percent. You may ask, "Wouldn’t that mean it breaks the first law of thermodynamics?" The answer, happily, is no.

The LED produces 69 picowatts of light using 30 picowatts of power, giving it an efficiency of 230 percent. That means it operates above "unity efficiency" — putting it into a category normally occupied by perpetual motion machines.

However, while MIT’s diode puts out more than twice as much energy in photons as it’s fed in electrons, it doesn’t violate the conservation of energy because it appears to draw in heat energy from its surroundings instead. When it gets more than 100 percent electrically-efficient, it begins to cool down, stealing energy from its environment to convert into more photons.

In slightly more detail, the researchers chose an LED with a small band gap, and applied smaller and smaller voltages. Every time the voltage was halved, the electrical power was reduced by a factor of four, but the light power emitted only dropped by a factor of two. The extra energy came instead from lattice vibrations.

The scientists involved have detailed their discovery in a paper published in Physical Review Letters, saying: "Experiments directly confirm for the first time that this behaviour continues beyond the conventional limit of unity electrical-to-optical power conversion efficiency."

69 picowatts of light, of course, is a very small amount — so you’re not likely to be able to read in bed with one of these LEDs. However, it could have applications in low-power electronics, acting as a thermodynamic heat engine but with fast electrical control.