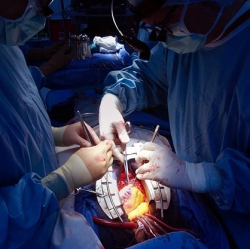 A former pub landlord from West Yorkshire has become the first person in the UK to have a hand transplant. Mark Cahill, who is 51, had been unable to use his right hand after it was affected by gout.

Doctors say he is making good progress after an eight-hour operation at Leeds General Infirmary. It is still very early to assess how much control of the hand will be gained – so far he can wiggle his fingers, but has no sense of touch.

Mark Cahill, from Greetland near Halifax, said: "When I look at it and move it, it just feels like my hand.

"Right now it feels really good, it’s not a lot of pain, it looks good, it looks a great match and I’m looking forward to getting it working now."

Mr Cahill’s new hand is still bandaged up, but he can already move his fingers. It is hoped that with time he will gain much greater levels of movement and sensation. He developed gout in his toes and feet 20 years ago. Five years ago it spread to his right hand leaving him unable to open his fingers or use his hand for anything.