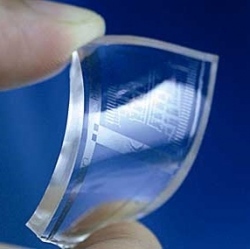 Speaking at the 243rd National Meeting & Exposition of the American Chemical Society, he said devices with these chips could retain data despite an accidental trip through the drier — or even a voyage to Mars. And with a unique 3-D internal architecture, the new chips could pack extra gigabytes of data while taking up less space.

“These new chips are really big for the electronics industry because they are now looking for replacements for flash memory,” said James M. Tour, Ph.D., who led the research team. “These new memory chips have numerous advantages over the chips today that are workhorses for data storage in hundreds of millions of flash, or thumb drives, smart phones, computers and other products. Flash has about another six or seven years in which it can be built smaller, but then developers hit fundamental barriers.”

Because of the way that the new memory chips are configured, namely with two terminals per bit of information rather than the standard three terminals per bit, they are much better suited for the next revolution in electronics — 3-D memory — than flash drives.

“In order to put more memory into a smaller area, you have to stack components beyond two dimensions, which is what is currently available,” he said. “You have to go to 3-D.” And the chips have a high on-off ratio, which is a measure of how much electrical current can flow in the chip when it stores information versus when it is empty. The higher the ratio, the more attractive the chips are to manufacturers.

The chips were originally composed of a layer of graphene or other carbon material on top of silicon oxide, which has long been considered an insulator, a passive component in electronic devices. Graphene is a thin layer of carbon atoms that’s touted as a “miracle material” because it is the thinnest and strongest known material. It was even the topic of a recent Nobel Prize. Originally, the researchers at Rice University thought that the amazing memory capability of the chips was due to the graphene. They discovered recently that they were wrong. The silicon oxide surface was actually making the memories, and now they can make them graphene-free. The work was done by Tour’s group in collaboration with Professor Douglas Natelson (Department of Physics) and Lin Zhong (Department of Electrical and Computer Engineering). The main students on the project were Jun Yao and Javen Lin.

The transparency and small size of the new chips enables them to be used in a wide range of potential applications. Manufacturers could embed them in glass for see-through windshield displays for everyday driving, military and space uses so that not only is the display in the windshield, but also the memory. That frees up space elsewhere in the vehicle for other devices and functionalities. In fact, the chips were onboard a recent Russian Progress 44 cargo spacecraft in August 2011 for further experimentation aboard the International Space Station. However, the vehicle never made it into space and crashed. “The spacecraft crashed over Siberia, so our chips are in Siberia!” said Tour. He hopes to send the chips on a future mission in July 2012 to see how the memory holds up in the high-radiation environment of space.

Current touch screens are made of indium tin oxide and glass, both of which are brittle and can break easily. However, plastic containing the memory chips could replace those screens with the added bonuses of being flexible while also storing large amounts of memory, freeing up space elsewhere in a phone for other components that could provide other services and functions. Alternatively, storing memory in small chips in the screen instead of within large components inside the body of a phone could allow manufacturers to make these devices much thinner.