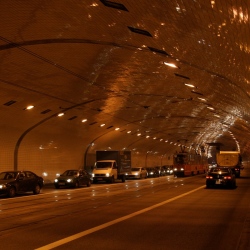 Road pollution is more than twice as deadly as traffic accidents, according to a study of UK air quality.

The analysis appears in Environmental Science and Technology, carried out by Steve Yim and Steven Barrett, pollution experts from MIT in Massachusetts.

They estimate that combustion exhausts across the UK cause nearly 5,000 premature deaths each year.

The pair also estimate that exhaust gases from aeroplanes cause a further 2,000 deaths annually.

Overall, the study’s findings are in line with an earlier report by the government’s Committee on the Medical Effects of Air Pollutants (COMEAP), which found that air pollution in 2008 was responsible for about 29,000 deaths in the UK.

The new study arrives at a slightly lower annual figure of 19,000, a difference the lead author of the COMEAP study, Fintan Hurley, attributes to differing methodology.

The latest study adds to the debate by breaking down mortality rates according to sector – transport, energy and industry.

The researchers combine models of atmospheric circulation and chemistry with source data and clinical studies to arrive at their independent figures for the health effects of pollution.

The findings challenge the traditional view that industrial plants are the main source of pollution Although the popular perception of air pollution involves images of smoke stacks billowing out toxic black fumes into the atmosphere, industry and the power sector turn out to kill fewer than vehicle emissions, the data shows.

"Cars and lorries emit right by where people live and work and so have a greater impact," explains lead author Steven Barrett.

The findings also pinpoint where the deaths happen: 2,200 every year in Greater London, another 630 in both Greater Manchester and West Midlands.

Because the model includes Europe-wide weather patterns, it also reveals how far the deadly effects of air pollution can reach.

Of the 19,000 annual UK deaths estimated, 7,000 are due to pollutants blown in from the continent. In London, European pollutants add 960 deaths each year to the 2,200 caused by UK combustion fumes.