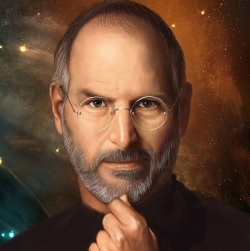 I’d heard some stories about Steve Jobs, but the stories I’d heard were nothing to what is in this book.

There’s no easy way to say this: Jobs comes across as a detestable human being. Devoid of any kind of feelings towards anyone else, he shouts, screams, cries and sulks his way through his petulant life.

There are plenty of unpleasant examples of how he uses people up and spits them out: from Steve Wozniak, the co-creator of the original Apple II, to Jony Ive, the design genius responsible for much of the look/feel of Apple’s products since the original iPod. And let’s not start on the way he treats his parents, his first wife and his daughter, the staff at restaurants and hotels, and his Apple board.

In an admirable departure from the normal authorised biography genre, this book leaves me with the feeling that there is almost nothing to like about Jobs: even though Isaacson seems to treat him as a visionary and a genius in almost every part of the book. Jobs’s decisions go unchallenged, and scorn is poured on anyone else who dares to challenge Jobs’s decisions. With the benefit of hindsight, it’s easy to make people who didn’t agree with his ideas to appear stupid. Platitudes to the dying Jobs from people like Bill Gates are treated as admissions that Microsoft got things wrong, and that Apple was the One True Way. This is probably playing to the book’s intended audience; but it’s not necessarily the right conclusion.

There are a few things to admire Jobs for. First, his almost single-handed devotion to “focus” – focusing in on a small amount of products and use-cases, rather than spreading yourself too thinly. Google could learn from this (and arguable has done over the past six months). The BBC could also learn from this, and probably is doing as part of Delivering Quality First.

Jobs’s self-belief (the “reality distortion field”) is interesting in a business context: almost none of Apple’s products appear to have been researched in the same way that most things are these days. Jobs’s gut feel and passion is evident; and his unwillingness to ever accept second-best, even if this made him a decidedly second-best human being.