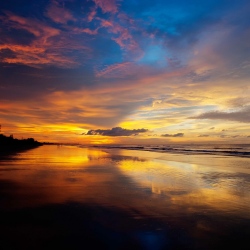 To China, the world’s biggest energy consumer, another Saudi Arabia of oil may lie beneath the ocean to its south. Escalating regional tensions mean large-scale drilling may be slipping further into the future.

The South China Sea may hold 213 billion barrels of oil, or 80 percent of Saudi Arabia’s reserves, according to Chinese studies cited in 2008 by the U.S. Energy Information Agency. The world’s second-largest economy claims “indisputable sovereignty” over most of the sea, including blocks off Vietnam that Exxon Mobil Corp. (XOM) and Russia’s Gazprom OAO (GAZP) are exploring.

Disputes have strained China’s ties with its neighbors and tensions rose this year as Vietnam said oil survey boats were harassed by Chinese vessels. The friction threatens maritime security in one of the world’s busiest shipping lanes and may be discussed at a two-day summit of Asia-Pacific leaders hosted by U.S. President Barack Obama in Honolulu starting tomorrow.

“China is the elephant in the room at the moment, so like it or not, you cannot ignore it,” said Lin Boqiang, director of the independent China Center for Energy Economics Research at Xiamen University in Fujian province. “Countries at the rim of the South China Sea are under pressure to find a practical way to deal with its presence — not to anger or challenge it.”

The sea lies south of mainland China at the western extreme of the Pacific Ocean, and while it borders several nations China claims a huge expanse. That’s based largely on a historical map that predates the founding of the People’s Republic in 1949. There are hundreds of islands, many disputed.