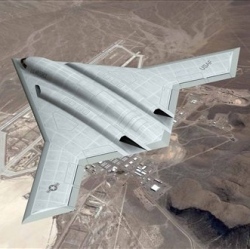 Northrop Grumman is developing a next-level drone aircraft that not only flies without a pilot onboard, but without any human controlling it from the ground. The Los Angeles Times has the story of the X-47B, an experimental plan which could be the first "unmanned aircraft system" to carry out missions guided only by on-board computers. While they would still require a human to program flight plans and targets, it may eventually lead to that future of sci-fi nightmares when heavily-armed robots patrol the skies, making decisions (and dropping bombs) without human interference.

The heavy use of aerial drones in Afghanistan and Pakistan is already criticized by human rights activists for turning death into an impersonal, video game-like experience. The units used in combat today are often controlled by pilots sitting in virtual cockpits halfway around the world, but that does mean that every move it makes — including the decision to fire — must still be made by a human. As technology advances, however, planes like this one could lead to a new era when life and death decisions are made without the input of an operator and drones are free to "improvise," perhaps even by targeting perceived threats to itself and troops on the ground.