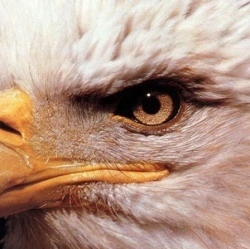 Ori Katz, Eran Small, and Yaron Silberberg of the Weizmann Institute have shown that they can accurately resolve an object that’s hiding behind nearly opaque obstacles, or around a corner (or in another room, as long as the door’s open. In both cases, the light is scattered by the obstacle (the frosted glass, the corner wall), creating what appears to be white noise — but their camera can take these speckles of noise and enhance them “1000-fold” (the scientists’ words) to recreate the image with surprising accuracy.

The approach is surprisingly simple, and relies on a device called a spatial light modulator (SLM). Basically, when light bounces off an object, each part of that object changes the phase of light differently. An SLM is an array of pixels that can alter the phase of light passing through it, depending on the electrical current passing through each pixel. In this case, the scientists used a genetic optimization algorithm to modulate each pixel of the SLM until a sharp image is extracted from the white noise.

In the image below, the first two images show the genetic algorithm’s ability to discern a single point of light in a mess of white noise; ‘c’ shows what the human eye would see, looking at the obstacle between the camera and object; and ‘d’ shows what this new camera can see through the obstacle