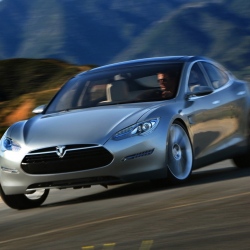 Until now, there hasn’t been an all-electric car fit for road-tripping. But Tesla’s Model S, due out late in 2012, is made for extended drives. Its battery goes up to 300 miles on a charge. Its cabin is spacious enough for seven passengers. And it can get up to cruising speed fast—the Model S accelerates from 0 to 60 in 5.6 seconds.

At 85 kilowatt-hours, the Model S boasts more than triple the battery capacity of the Nissan Leaf. Its thousands of lithium-ion cells use a new electrode chemistry from Panasonic, which could allow them to store more power than other comparably sized cells.

Tesla plans to install proprietary 440-volt charging stations (first along the I-5 Corridor between Los Angeles and San Francisco) built to match up with the Model S’s circuitry. They will provide a full charge in an hour. Standard chargers will require a full night.

To protect the motor, circuitry and battery from heat, channels filled with liquid coolant run through the components. Pumps cycle coolant through a front radiator and a pair of A/C condensers. This helps the motor deliver twice the power of its Roadster predecessor.

To increase the sedan’s range, the designers of the Model S kept its weight low with a body constructed from 97 percent aluminum. They added heavier structural steel only where necessary for safety: in central supports and front-end crash zones.