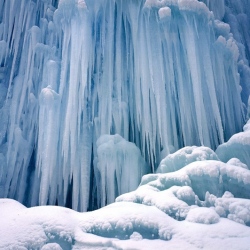 The projections, published in Nature Geoscience, are somewhat higher than those from other models.

The researchers aimed to explore a wider range of possible futures, which they say helps "get a handle" on the uncertainties of the climate system.

People planning for the impacts of climate change need to consider the possibility of warming of up to 3C by 2050, even on a mid-range emission scenario, the researchers say.

The representations of physical parameters were varied between runs of the model, reflecting uncertainties about precisely how the climate system works.

And the forecast range was derived from models that accurately reproduced observed temperature changes over the last 50 years.

The low end of their range is similar to that of the Intergovernmental Panel on Climate Change (IPCC) in its 2007 report, but the high end is somewhat above the range their analysis produced.

Myles Allen of the School of Geography and Environment and Department of Physics, Oxford University, principal investigator of climateprediction.net, said other climate modelling groups’ data did not "set out to explore the full range of uncertainty, which is why studies like ours are needed."

The research was described as "an important step toward estimating uncertainty more comprehensively," by Gabi Hegerl, professor of climate system science at the University of Edinburgh.

The results were also described as "very promising" by Prof Corinne Le Quere, director of the Tyndall Centre for Climate Change Research at the University of East Anglia.