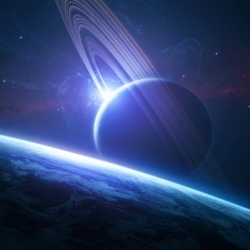 Astronomers have made a sweet discovery: simple sugar molecules floating in the gas around a star some 400 light-years away, suggesting the possibility of life on other planets.

The discovery doesn’t prove that life has developed elsewhere in the universe—but it implies that there is no reason it could not. It shows that the carbon-rich molecules that are the building blocks of life can be present even before planets have begun forming.

Scientists use the term "sugar" to loosely refer to organic molecules known as carbohydrates, which are made up of carbon, hydrogen, and oxygen.

The molecules that the team detected in space are the simplest form of sugar, called glycoaldehyde, explained lead astronomer Jes Jørgensen of Denmark’s Copenhagen University.

Glycoaldehyde can be found on Earth, usually in the form of an odorless white powder. While it isn’t used to sweeten foods, it is important because scientists think it plays a key role in the chemical reaction that forms ribonucleic acid (RNA), a crucial biomolecule present in all living cells.