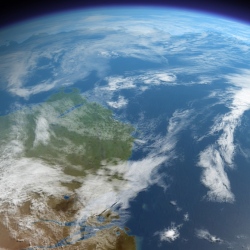 He’s already the first private citizen to launch a spaceship into orbit and bring it back to Earth, so it’s no surprise Elon Musk believes he will be the first entrepreneur to put a man into space, too. But as he vies with other, larger private sector companies to do so, he tells Scott Pelley the criticism of the commercialization of space travel from the very astronauts who inspired his quest is difficult to take. In an extensive interview, Musk talks to Pelley and allows cameras into his SpaceX factory for a 60 Minutes story to be broadcast Sunday, March 18 at 7 p.m. ET/PT.

With the Space Shuttle program now retired, NASA does not have a vehicle to put Americans into space. The Obama administration has decided to farm out the next manned spacecraft to the private sector. Musk, the Internet billionaire who co-founded PayPal, has invested $100 million into his company, known as SpaceX, to compete for the contract. "I think we are at the dawn of a new era," he tells Pelley, about the government handoff of the manned orbital space program to the private sector. Does he believe his rocket will be the next American craft to put an astronaut into space? "I believe that is the most likely outcome," says Musk.

But two of the people who inspired Musk – Apollo Astronauts Neil Armstrong and Gene Cernan, who walked on the Moon – were early critics of the president’s plan to commercialize space. They went before Congress to protest the government’s reliance on the private sector as a mistake that could erode America’s preeminent role in space exploration. "I was very sad to see that," says Musk, who said he was hoping men like them would cheer him on. "Those guys are heroes of mine, so it’s really tough…I wish they would come and visit…see the hard work that we’re doing here and I think that it would change their mind," Musk tells Pelley.

Musk shows Pelley around the main headquarters of SpaceX in Hawthorne, Calif., where over a 1,000 staffers do most of the work to produce rockets, engines, capsules and the flight software needed to operate them. He knows he is up against long-entrenched aeronautical companies much larger than his. "It’s like a little kid fighting a bunch of sumo wrestlers. Usually, the sumo wrestlers win," he says. "[But] every now and then, the little scrappy company wins and I think this will be one of those times," says Musk.

A critical factor in the move to private companies like his is the cost savings. At the heart of Musk’s goal is the idea of less costly space exploration so mankind can expand beyond Earth, perhaps to insure its survival. "I think it’s important that humanity become a multi-planet species…compared with one where we are forever confined to Earth until some eventual extinction event," he tells Pelley. "That’s really why I started SpaceX."