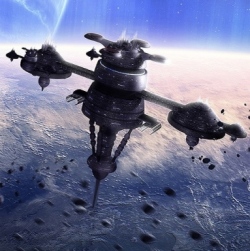 Obayashi Corp., headquartered in Tokyo, has unveiled a project to build a space elevator by the year 2050 that would transport passengers to a station 36,000 kilometers above the Earth and transmit power to the ground.

A cable, made of carbon nanotubes, would be stretched up to 96,000 kilometers, or about one-fourth of the distance between the Earth and the moon. One end of the cable would be anchored at a spaceport on the ground, while the other would be fitted with a counterweight.

The terminal station would house laboratories and living space. The elevator car could carry 30 people to the station at 200 kilometers per hour, a 7-1/2 day trip.