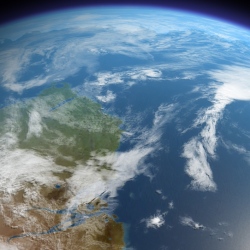 Though very little is known for certain, a joint announcement from aerospace giants Boeing and Lockheed Martin along with business-jet specialists Gulfstream is expected at the imminent Farnborough Air Show, suggesting a collaborative effort between the three corporations. NASA is also said to be offering its assistance.

If accurate, the reported speed would make the supersonic jet, said to be called X-54, almost twice as fast as Concorde. Concorde hasn’t flown since its retirement in 2003.

Reports assert that the three companies claim to be close to cracking the problem of the sonic boom, with an engineer purportedly describing the sound the new jet would make as "closer to a puff or plop." It’ll be interesting to see if the X-54’s eventual design bears any similarity to previously touted noise reduction measures such as v-tails and biplane wings.

It’s far from clear who this information comes from, or when and where it emerged. However, Gizmag will be on the ground at the Farnborough Airshow, so if an announcement on a spiritual successor to Concorde is made, we’ll be sure to bring you what we know.