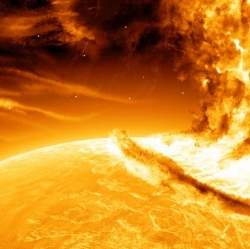 Twin Creeks, a solar power startup that emerged from hiding today, has developed a way of creating photovoltaic cells that are half the price of today’s cheapest cells, and thus within reach of challenging the fossil fuel hegemony. The best bit: Twin Creeks’ photovoltaic cells are created using a hydrogen ion particle accelerator.

As it stands, almost every solar panel is made by slicing a 200-micrometer-thick (0.2mm) wafer from a block of crystalline silicon. You then add some electrodes, cover it in protective glass, and leave it in a sunny area to generate electricity through the photovoltaic effect (when photons hit the silicon, it excites the electrons and generates a charge). There are two problems with this approach: Much in the same way that sawdust is produced when you slice wood, almost half of the silicon block is wasted when it’s cut into 200-micrometer slices; and second, the panels would still function just as well if they were thinner than 200 micrometers, but silicon is brittle and prone to cracking if it’s too thin.