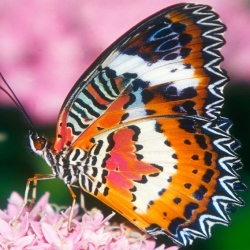 The link between the mutations and the radioactive material was shown by laboratory experiments, they report.

The work has been published in the journal Scientific Reports.

When the accident occurred, the adult butterflies would have been overwintering as larvae.

By comparing mutations found on the butterflies collected from the different sites, the team found that areas with greater amounts of radiation in the environment were home to butterflies with much smaller wings and irregularly developed eyes.

"It has been believed that insects are very resistant to radiation," said lead researcher Joji Otaki from the University of the Ryukyus, Okinawa.

"In that sense, our results were unexpected," he told BBC News.

The Japanese researchers have been studying the species for more than a decade
Prof Otaki’s team then bred these butterflies within labs 1,750km (1,090 miles) away from the accident, where artificial radiation could hardly be detected.