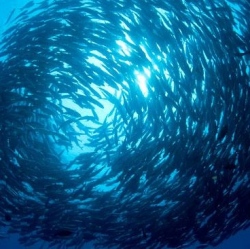 A team of scientists has set out on a six-week mission, funded by the Natural Environment Research Council, to explore the Indian Ocean’s underwater mountains, or seamounts.

The scientists aboard the research vessel, the RRS James Cook, will study life thousands of metres below the surface.

In the third of her BBC Nature diary entries, Aurelie Spadone from the International Union for the Conservation of Nature, who is part of the team, describes the evidence she has seen of the far-reaching human impact on these deep sea habitats.

We’re now half way through the cruise, although there is still a long way to go before reaching Port Elizabeth (South Africa), which is our arrival port. We are now in the vicinity of a seamount called Middle of What, the third of five scheduled stops on our itinerary.

Melville bank painted a very different picture to that of Coral seamount. Throughout our exploration of this site we have found evidence of human impact.