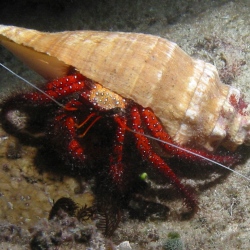 We’re prepared for all sorts of nightmare scenarios of the end of modern society, from hordes of marauding zombies to a Terminator-like robot apocalypse. But mankind’s downfall may instead be caused by trillions of crabs, lashing out at humanity because they’ve been put to work powering our computing systems. In one of the oddest technological advances of recent times, scientists in Japan have created a very basic computer using swarms of soldier crabs.

Yukio-Pegio Gunji, a researcher at Kobe University in Japan, observed that soldier crabs have unusual behavior — when two swarms meet, they become one swarm heading in the direction that is the sum of their velocities. It is this behavior that led Gunji to theorize that crabs could be used to create the AND, OR, and NOT logic functions that serve as the backbone for modern computers. And so the team of researchers created a virtual crab computer, and after that met with some success, created a real-life crab computer.

In this case, the usual 0s and 1s of binary code were replaced with the absence of presence of a group of crabs, respectively. To get the crabs to move, scientists needed to employ a shadow to make the crabs believe that a bird was about to swoop down and… well, eat the computer.

While crab-based technology may not exactly be the future — thank goodness, we’re terrified by those claws — experiments such as these bring scientists one step closer to their goal of creating useful, biological computers. That advancement would allow for computers to think for themselves, which quite frankly, brings us right back to a Terminator apocalypse. But hey, better robots than crabs, right?