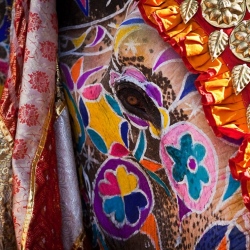 It looks like 2015′s going to be a big year for Samsung’s mobile teams. As well as predicting the coming of the fabled folding smartphone, the company is also hoping to release a 4K smartphone too.

The news was disclosed at Samsung’s second ever Analyst Day. Though it’s common knowledge that Samsung are working on a 2K AMOLED smartphone display (possibly set for inclusion in the Galaxy S5), this is the first we’ve heard Samsung discuss its 4K phone screen plans openly. What’s more surprising is just how soon they intend to have it ready — few people will have 4K TV screens in their homes by 2015, let alone in their pockets.

You have to ask though, as we have before, what’s the point? Driving that many pixels on a display that should be able to fit inside your pocket is pretty much pointless — any improvement in visual fidelity at that scale (unless you hold the phone right up against your eye-balls) will be negligible, while the processing power needed to push those pixels will be phenomenal and an equally phenomenal drain on any battery. Unless Samsung are planning a phone that folds out to the size of a portable TV, and is bursting at the seams with battery capacity, it seems like a case of chasing the numbers for the sake of it.