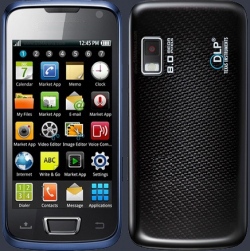 The device is perceived to be critical to how people view both Samsung’s brand and the Android system it runs.

Analysts say the popularity of the previous Galaxy – the S2 – was a major factor in the firm overtaking Nokia to become the world’s best-selling mobile phone maker.

Samsung said that the new Super Amoled (active-matrix organic light-emitting diode) display was 22% larger than its predecessor, but the actual device was not much wider since it had shrunk the size of the bezel.

The development allows Samsung to boast it has a slightly larger screen than the 4.7 inch dimensions of the HTC One X, the top of the range model from its Taiwanese rival.

Rory Cellan-Jones and CCS Insight’s Ben Wood assess the new Galaxy phone
It is also significantly bigger than the 3.5 inch display of Apple’s iPhone 4S and the 4.3 inch screen of Nokia’s Lumia 900.

Samsung may have been influenced by the popularity of its phone/tablet hybrid, the Galaxy Note, which has an even bigger screen and has proved to be more popular than many industry watchers had forecast.

For example, it said that the front camera would identify the user’s eyes and would not go dark or lock so long as they were looking at it.

Other features on the S3 include an 8 megapixel camera on the rear, and a 1.9 megapixel front camera for video calls.

The phone also uses what is described as a "natural language user interface" dubbed S Voice. The South Korean company said it was a major improvement on the voice control features it included on earlier models.

See how mobile phones evolved
"It is more like a good friend and listens intently and responds effectively to you," a spokesman said at the launch event in London.

The facility can be used to command the phone to play songs, adjust the volume, send texts or emails and take photographs.

The function is likely to be compared to Apple’s Siri software.

One expert attending the launch event said that the advances Samsung had made should help Google’s Android continue to be the most used smartphone operating system.

"The importance of the Galaxy S3 to Samsung cannot be underestimated," said Adam Leach, principal analyst at Ovum.

"The company has built its reputation on producing the ‘must-have’ Android smartphone and in the process has become the poster child for the Android platform.

"However, Samsung’s Galaxy S3 not only needs to stand out amongst a plethora of other Android-based smartphones, it will also go head-to-head with the next iteration of Apple’s flagship smartphone, the iPhone."

Mr Leach added that Apple was not expected to release its new handset until much closer to the end of the year.

The Galaxy S3 can wirelessly connect to Samsung television screens Not everyone at the launch was convinced by the design.

"It is not an eye-catching device that will overwhelm consumers," said Francisco Jeronimo, European mobile devices research manager for IDC.

"It is a bit of a facelift of the Galaxy Nexus. It feels less ‘plasticky’ though."

The new handsets will be available from the end of May in Europe. Launches in Asia, the Middle East and Africa will follow.

A 4G version will go on sale in the US and South Korea in the summer.