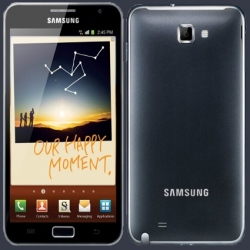 Tablets are predominantly media consumption devices, rather than productivity devices, has been something of a stance of mine on this blog. Increasingly, it’s a stance from which I’m willing to back off somewhat. And with a video like that one, I’m almost sold.

For me, this is the first time I’ve seen a tablet do something I really want, but haven’t quite found elsewhere–that moment where hand-written text is converted into type. I love writing by hand (mostly on paper…but I suppose I could learn a new medium), but the piles of notebooks I’ve accumulated are, to put it mildly, impractical. Which notebook’s from my trip to Paris? And which page did I record that funny anecdote a friend told me? Handwriting simply isn’t searchable–except when it is, and that’s what the Galaxy Note 10.1 promises to do.

Other features I find especially impressive are an apparent ability to run two apps side-by-side in tandem. Also, towards the end of the video, my imagination is piqued by the AllShare Play GroupCast–the power to collaborate across multiple tablets, more or less at the same time.