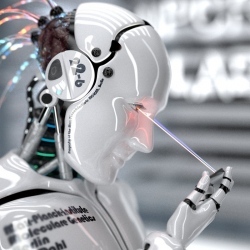 Race Against the Machine deserves praise for jump-starting an important discussion about the effect of technology on our economy. As the authors point out, the impact of computers and information technology has been largely left out of most analysis regarding causes of our current unemployment woes. This book, therefore, is an attempt to “put technology back in the discussion.”

BUT IT SUFFERS FROM SCHIZOPHRENIA

The book is divided into roughly two halves: one pessimistic and one optimistic. The first three chapters comprise the pessimistic portion and make a compelling case for how accelerating technological progress and rapid productivity gains are not only creating unemployment, but also contributing to greater inequality. The last two chapters take a more optimistic tone and attempt to lay out possible solutions to these problems.

Unfortunately, the pessimistic chapters are much more convincing. The net effect is rather dissonant, not unlike a general rounding up his troops and announcing, “Gentlemen, we’re outmatched in every possible way. Now go out there and win!”

A QUICK SUMMARY OF THE “PESSIMISTIC” CHAPTERS

Race Against the Machine begins by building a strong argument for technological unemployment. The authors draw our attention to recent innovations like self-driving cars and Jeopardy-winning computers and show how such advances threaten to encroach further and further into realms once dominated by human labor. Such technologies ultimately affect all sectors of the economy since computers are a prime example of what economists call a “General Purpose Technology.” Like steam power and electricity, computers reside in a category of innovation “so powerful that they interrupt and accelerate the normal march of economic progress.” Moreover, thanks to Moore’s law, computers are improving at an exponential rate, so we can expect very disruptive changes to arrive very quickly indeed.

Making matters worse, a host of related trends result in the benefits of technological progress not being shared equally. Not only is the value of highly skilled workers diverging sharply from that of low skilled workers, but the value of capital is increasing relative to that of labor. Also important is the “superstar effect.” Technological advances extend the reach of superstars in various fields and allow them to win ever larger market shares. This comes at the expense of the many, since “good, but not great, local competitors are increasingly crowded out of their markets.” Putting all this together you get the central thesis of Race Against the Machine: namely, that digital technologies are outpacing the ability of our skills and organizations to adapt.