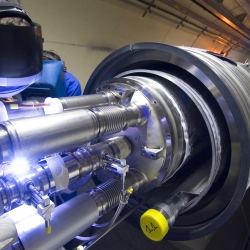 The finding deals a significant blow to the theory of physics known as supersymmetry. Many researchers had hoped the LHC would have confirmed this by now. Supersymmetry, or SUSY, has gained popularity as a way to explain some of the inconsistencies in the traditional theory of subatomic physics known as the Standard Model.

The new observation, reported at the Hadron Collider Physics conference in Kyoto, is not consistent with many of the most likely models of SUSY. Prof Chris Parkes, who is the spokesperson for the UK Participation in the LHCb experiment, told BBC News: "Supersymmetry may not be dead but these latest results have certainly put it into hospital."

upersymmetry theorises the existence of more massive versions of particles that have already been detected. Their existence would help explain why galaxies appear to rotate faster than the Standard Model would suggest. Physicists have speculated that as well as the particles we know about, galaxies contain invisible, undetected dark matter made up of super particles. The galaxies therefore contain more mass than we can detect and so spin faster.

Researchers at the LHCb detector have dealt a serious blow to this idea. They have measured the decay between a particle known as a Bs Meson into two particles known as muons. It is the first time that this decay has been observed and the team has calculated that for every billion times that the Bs Meson decays it only decays in this way three times.