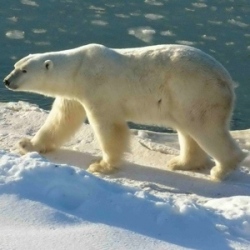 Polar bears, long thought to have branched off relatively recently from brown bears, developing their white coats, webbed paws and other adaptations over the last 150,000 years or so to cope with life on Arctic Sea ice, are not descended from brown bears, scientists report.

Instead, according to a research team that looked at DNA samples from the two species and from black bears, the brown bear and polar bear ancestral lines have a common ancestor and split about 600,000 years ago.

The report, published online on Thursday in the journal Science, is the latest attempt to understand the surprisingly murky origins of one of the most familiar animals on earth, and a potent environmental symbol because it is losing the sea ice it depends on to a warming climate. Because of climate change, and threats from shipping, hunting and pollution, the polar bear is listed as “vulnerable,” one level below endangered, by the International Union for Conservation of Nature.

The report comes to no conclusion about how sensitive the bears are to the current loss of the sea ice that they live on, and the evolutionary tale it presents can be read in different ways.

The findings challenge the idea that the bears adapted very quickly, but confirm that they have made it through warming periods and loss of sea ice before. It may have been touch and go for the bears, however, because the authors find evidence of evolutionary bottlenecks, probably during warm periods, when only small populations survived, even though warming was occurring much more slowly than it is now.

The researchers, including Axel Janke and Frank Hailer of the Biodiversity and Climate Research Center in Frankfurt, compared DNA samples from 19 polar bears, 18 brown bears and 7 black bears.

What they found, Dr. Hailer said, was that polar bears “are older and much more genetically unique” than had been thought. Other studies in the past few years suggested that the species was “a very recent offshoot from brown bears,” he said, dating from about 150,000 years ago.

That calculation was based on DNA outside the cell nucleus known as mitochondrial DNA, which is passed on only through females, and so gives an incomplete picture of evolution.

Dr. Hailer and colleagues looked at 14 stretches of nuclear DNA. This is the genetic material that comes from both parents and combines at conception to form a blueprint for a new individual.

Charlotte Lindqvist, at the University at Buffalo, who was not involved in the study, was the lead author of a paper in 2010 in Proceedings of the National Academy of Sciences that looked at mitochondrial DNA and homed in on the 150,000-year time frame for polar bear origin, with the species splitting off from brown bears.

She said in an e-mail that the new study “demonstrates that the two species do indeed represent separate lineages.” But she questioned whether the evidence was sufficient to provide a firm date for polar bear origins. Comparisons of the full genome in both species are needed, she said, to nail down the timing of polar bear evolution.

For animals so well known, polar bears have been something of a puzzle in terms of their origins. Part of the reason is that they live mostly on sea ice, so fossils preserved on land are rare.

So some questions have had to wait for modern techniques for reading genetic material that have made the DNA of living species as useful as any fossil bed for tracing evolution.

But mysteries remain, some more puzzling than ever. Why does the mitochondrial DNA suggest a much more recent origin for polar bears? Dr. Hailer suggests that it is evidence not of the origin of the bears, but of interbreeding between polar and brown bears long after they evolved, perhaps when the polar bears were driven to land because of sea ice loss.

Another researcher, Beth Shapiro of Pennsylvania State University, suggested in a recent paper that interbreeding might have occurred in periods of environmental stress. In the journal Current Biology in 2011, Dr. Shapiro and a team of scientists reported that polar bears and extinct Irish brown bears interbred about 130,000 years ago, and that the brown bear mitochondrial DNA from that mating has spread to all polar bears over time. Dr. Hailer said that ice loss now could be far more threatening to polar bears than in the past because it is happening faster than ever before, and because the bears also face hunting and pollution.