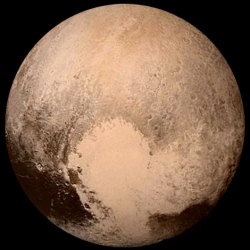 Solar wind spews off from the Sun into the solar system at a supersonic 400 kilometers per second, bathing planets, asteroids, comets, and interplanetary space in a soup of mostly electrons and protons. Until recently, scientists thought Pluto’s interaction with the solar wind was more like that of a comet.

This interaction has a large region of gentle slowing of the solar wind, as opposed to the abrupt diversion solar wind encounters at a planet like Mars or Venus. Because it’s so weak, scientists thought Pluto’s gravity would not be strong enough to hold heavy ions close in, thus resulting in an interaction with a highly extended atmosphere.

Using data from an instrument aboard the New Horizons spacecraft gathered on its Pluto flyby in July 2015, McComas et al. observed the material coming off of Pluto and saw how it interacts with the solar wind. Specifically, the researchers could distinguish the heavy ions of methane, the main gas escaping from Pluto’s atmosphere, from the light ions of hydrogen that come from the Sun using the Solar Wind Around Pluto (SWAP) instrument.

The researchers found that solar wind particles initially approaching Pluto are reminiscent of how solar wind hits comets, with the boundary between the dwarf planet and the solar wind falling relatively close to the surface. But downwind, Pluto’s long tail, loaded with heavy ions from its atmosphere, is shaped by the interaction of the solar wind with an obstacle sustained by atmospheric thermal pressure, similar to what’s found at Venus and Mars.

On the basis of these observations, the authors report that Pluto is not fully comet-like and not fully planet-like, but something in between. Scientists have never seen such a hybrid anywhere else in the solar system.