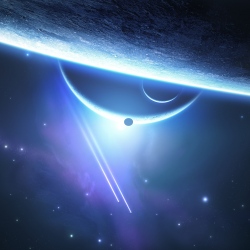 Planetary resources with mass produced space telescopes is making the telescope nodes for a hypertelescope array. Assuming they get to Arkyd 200 (telescopes with propulsion) by about 2020 they will be able to use the hundreds of space telescopes at L2 to create a massive hypertelescope array to image exoplanets. Resolution could get to the kilometer level. They will be able to image neutron stars at 10 meter resolutions (more photons to gather from stars).

* a 100-pixel image of a planet twice the width of Earth some 16.3 light years away would require the elements making up a space telescope array to be more than 43 miles apart. Such pictures of exoplanets could make out details such as rings, clouds, oceans, continents, and perhaps even hints of forests or savannahs. Long-term monitoring could reveal seasonal shifts, volcanic events, and changes in cloud cover.

* visible “portraits” of exoplanets can be obtained in 30 minutes of exposure, using a 150 kilometer hypertelescope with 150 mirrors of 3 meters.

* 10 km resolution at 4.37 Light years. That’s about what our satellite photos took back in the 1960’s. Certainly high enough resolving power to image landforms, islands, forests, whatever else is going on. Thsi would require a hypertelescope array that is 1,500 miles across.

* To resolve 30 foot objects looking 4.37 light years away the elements making up a telescope array would have to cover a distance roughly 400,000 miles wide, or almost the Sun’s radius. The area required to collect even one photon a year in light reflected off such a planet is some 60 miles wide. To determine motion of 2 feet per minute — and that the motion you’re seeing is not due to errors in observation — the area required to collect the needed photons would need to be some 1.8 million miles wide. [NOTE – I do not think there would be enough photons coming off of such a small object at light year distances. This is why the hypertelescope expert talks about massive telescope arrays to resolve neutron stars. They are small but are emitting enough photons for an image]