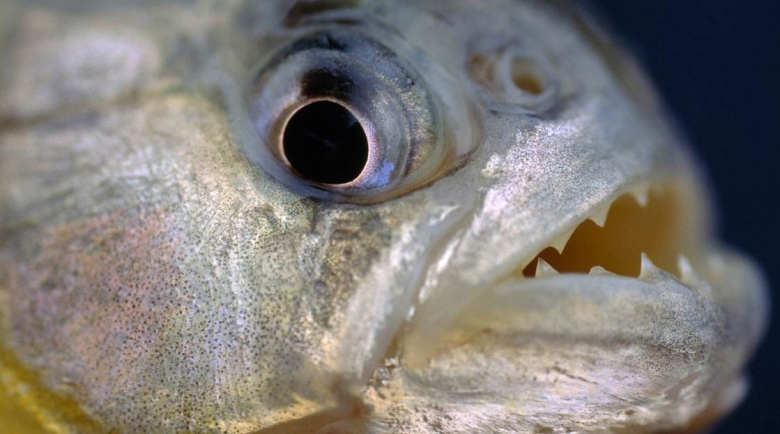 Taking into consideration its size, an ancient relative of piranhas weighing about 20 pounds delivered a bite with a force more fierce than prehistoric whale-eating sharks, the four-ton ocean-dwelling Dunkleosteus terrelli and – even – Tyrannosaurus rex.

Besides the force of the bite, Megapiranha paranensis appears to have had teeth capable of shearing through soft tissue the way today’s piranhas do, while also being able to pierce thick shells and crack armoring and bones, according to Stephanie Crofts, a University of Washington doctoral student in biology.

“If our calculations are correct, Megapiranha was probably a bone-crushing predator taking bites of anything and everything,” she said. Crofts is co-author of “Mega-Bites: Extreme jaw forces of living and extinct piranhas,” published Dec. 20 in the online journal Scientific Reports.

The bite force of Megapiranha, which lived 10 million years ago, was extrapolated from the first field measurements of the biting force of Earth’s largest piranha today, Serrasalmus rhombeus or black piranha. One 2 ½ pound fish delivered a bite with a force of 320 newtons, or about 72 pounds, which is 30 times its body weight. The force is nearly three times greater than the bite force of an equivalent size American alligator.

Based on the 2 ½ pound piranha and other specimens tested in the wild,  the scientists calculate that Megapiranha paranensis, which weighed approximately 22 pounds, could have had a bite force anywhere from 1,240 to 4,750 newtons  – or 280 to 1,070 pounds – and possibly more.

Other scientists have previously estimated that T. rex slammed its jaws shut with 13,400 newtons, or 3,000 pounds of force, but that’s nowhere near 30 times its body weight.