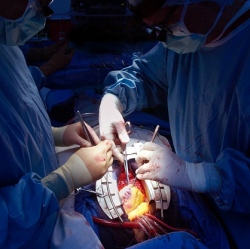 A team of scientists has used some of Warshaw’s earlier findings to develop a possible treatment to prevent hypertrophic cardiomyopathy (HCM), an inherited disease that can cause the heart to thicken and stop pumping blood effectively, leading to heart failure.

"This may offer a generalized approach to solving hypertrophic cardiomyopathy," says Warshaw, who is also an investigator in the Cardiovascular Research Institute of Vermont at UVM. "I think it’s extremely promising."

HCM can result from different mutations of many proteins in the heart. One of those proteins, myosin, acts as a tiny molecular motor in every heart muscle cell. It pulls and releases on a rope-like protein, actin, in order to make the heart muscle contract and relax as it pumps blood.

A mutation of myosin can "alter the motor’s power-generating capacity" and make the heart work improperly, which in turn causes the heart to enlarge, Warshaw says.

For many years, scientists assumed that the mutation caused the myosin to lose its motoring power, throwing off the whole heart engine. But in a study Warshaw published in 2000 in Circulation Research, he and colleagues found that the problem wasn’t diminished power in the myosin; it was too much power with this mutation.

"By analogy, placing the engine of an Indy race car (i.e., mutant myosin) in a stock car chassis (i.e., the heart’s connective tissue matrix) could lead to internal stress and structural damage," Warshaw writes in his "Perspectives" article. "For the heart, this amounts to inducing cardiac fibrosis and muscle cell disarray that are characteristic of HCM patients."

"When they gave the drug to a young mouse with the mutation, the mouse’s heart developed normally," Warshaw says.

Because HCM runs in families, an infant who tests positive for the genetic mutation could receive the treatment and stave off the disease, Warshaw says. Development of a human drug, however, would require much more extensive testing and many remaining questions to be answered, he says.

Nonetheless, Warshaw sees great potential. In previous studies, he has found that mutations to other heart proteins also result in increased heart muscle power generation, in turn leading to HCM. The same molecule, he says, could still be used on the myosin motor to compensate and thus block the disease in those cases as well.