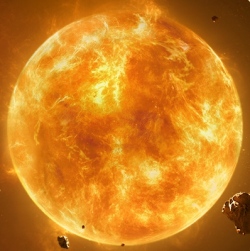 The two physics stories that dominated the news in 2011 were questions rather than solid scientific results, namely "Do neutrinos travel faster than light?" and "Has the Higgs boson been found?". However, there have also been some fantastic bona fide research discoveries over the last 12 months, which made it difficult to decide on the Physics World 2011 Breakthrough of the Year.

1. Shifting the morals of quantum measurement

Beam splitting experiment reveal, for example, that a photon detected on the right-hand side of the diffraction pattern is more likely to have emerged from the optical fibre on the right than from the optical fibre on the left. While this knowledge is not forbidden by quantum mechanics, Steinberg says that physicists have been taught that "asking where a photon is before it is detected is somehow immoral".

Led by Jeff Lundeen at the National Research Council of Canada in Ottawa – a former colleague of Steinberg – a team has used weak measurement to map out the wavefunction of an ensemble of identical photons without actually destroying any of them. Quantum tomography, in contrast, maps out the wavefunction at the expense of destroying the state

Coming in at third place are two teams – one at Cornell University in the US led by Alexander Gaeta, and the other at Imperial College London headed by Martin McCall. In early 2011 McCall’s team published a theoretical analysis of how an event in space and time could be cloaked, which he later described in a special Physics World feature. A few months later, Gaeta and colleagues built a device that uses two "split time lenses" to do just that. As well as changing our ideas about what can and cannot be cloaked, space–time cloaking could also be used in the perfect bank heist – at least in theory.

Fourth spot on the list goes to Darach Watson and colleagues at the University of Copenhagen, Denmark, and the University of Queensland, Australia, who have worked out a way of using supermassive black holes – which power active galactic nuclei (AGNs) – as "standard candles" for making accurate measurements of cosmic distances. The work is important because AGNs can be found just about everywhere in the universe, and unlike the supernovae currently used as standard candles, the light from AGNs endures for long periods of time.

Christopher Wilson and colleagues of Chalmers University of Technology in Sweden together with physicists in Japan, Australia and the US have bagged fifth place because they are the first to see the dynamical Casimir effect in the lab. The effect arises when a mirror is moving so quickly through a vacuum that pairs of virtual photons – which are always appearing and then annihilating – are pulled apart to create real photons that can then be detected. As well as shedding new light on the Casimir effect, the team’s use of a superconducting quantum interference device (SQUID) as the mirror make this an extremely clever experiment.

6th place: Taking the temperature of the early universe

Just after the Big Bang, the universe was a complicated soup of free quarks and gluons that eventually condensed to form the protons and neutrons we see today. Sixth place in our top 10 goes to a team of physicists in the US, India and China that has made the best calculation yet of this condensation temperature: two trillion degrees Kelvin. As well as providing important insights into the early universe, the work also advances our understanding of quantum chromodynamics, which describes the properties of neutrons, protons and other hadrons.

7th place: Catching the flavour of a neutrino oscillation

Seventh place is awarded to the international team of physicists working on the Tokai-to-Kamioka (T2K) experiment in Japan. The researchers fired a beam of muon neutrinos 300 km underground to a detector, where they found that six neutrinos had changed, or "oscillated", into electron neutrinos. While the measurement is not good enough to claim the discovery of the muon-to-electron neutrino oscillation, it is the best evidence yet that one "flavour" of neutrino can oscillate into another.

In a fascinating bit of biophysics, Malte Gather and Seok Hyun Yun at Harvard Medical School in the US share eighth place for being the first to make a laser from a living biological cell. By shining intense blue light onto green fluorescent protein molecules inside an embryonic kidney cell, the molecules generate light that is intense, monochromatic and directional. The cells survive the ordeal and this amazing phenomenon could potentially be used to distinguish cancerous cells from healthy ones.

9th place: Complete quantum computer made on a single chip

Ninth place goes to Matteo Mariantoni and colleagues at the University of California, Santa Barbara for being the first to implement a quantum version of the "Von Neumann" architecture found in PCs. Based on superconducting circuits and integrated on a single chip, the new device has been used to perform two important quantum-computing algorithms. Its development moves us closer to the creation of practical quantum computers that solve real-life problems.

Michele Fumagalli and Xavier Prochaska of the University of California, Santa Cruz and John O’Meara of Saint Michael’s College in Vermont take 10th spot for being the first to catch sight of clouds of gas that are pure relics of the Big Bang. Unlike other clouds in the distant universe – which appear to contain elements created by stars – these clouds contain just the hydrogen, helium and lithium created by the Big Bang. As well as confirming predictions of the Big Bang theory, the clouds provide a unique insight into the materials from which the first stars and galaxies were born.