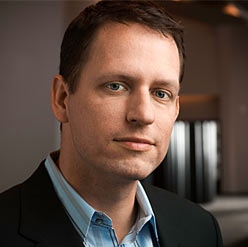 Peter Thiel is a grump, but a special kind of grump. He is a dystopian utopian (if such a person can exist). The investor who wrote the first check for Facebook both believes in the power of technology to transform our lives, and is perennially disappointed by it.

A lengthy profile in the November 28, 2011 edition of the New Yorker (summary here) states: “his main lament is that America—the country that invented the modern assembly line, the skyscraper, the airplane, and the personal computer—has lost its belief in the future.”

It is an argument he’s made before. Last September, at Disrupt SF he made the case that innovation is dead across most of the economy (you can watch the video of the session below). He is co-authoring a book on the subject with Max Levchin and Gary Kasparov, called The Blueprint.

But what about something like the iPhone?  ”I don’t consider this to be a technological breakthrough,” he tells the New Yorker. Technology simply isn’t creating enough jobs or moving the needle in areas like transportation, health, or energy.

From the article, here is his assessment on the impact of the Internet, Apple, and Twitter:

“The Internet—I think it’s a net plus, but not a big one,” he said. “Apple is an innovative company, but I think it’s mostly a design innovator.” Twitter has a lot of users, but it doesn’t employ that many Americans: “Five hundred people will have job security for the next decade, but how much value does it create for the entire economy ? It may not be enough to dramatically improve living standards in the U.S. over the next decade or two decades.”