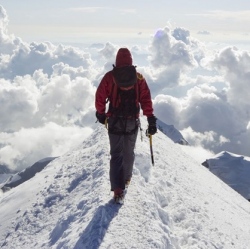 As numerous companies continue their push to get us to entrust our data to the cloud, there are many still justifiably concerned about the security of cloud computing-based services. Now an international team of scientists have demonstrated that perfectly secure cloud computing is possible by combining the power of quantum computing with the security of quantum cryptography. They carried out what they claim is the first demonstration of "blind quantum computing," in which a quantum computation was carried out with the input, computation, and output all remaining unknown to the computer, and therefore, also any eavesdroppers.

While it is expected that quantum computers will play an important role in future information processing, some believe that – like today’s supercomputers – they will be limited to a few specialized facilities around the world. While this brings to mind the quote most often attributed to IBM chairman Thomas Watson in 1943, "I think there is a world market for maybe five computers," given the inherent difficulties in building quantum devices, there’s every chance such a scenario will eventuate – at least in the near term.

The international research team working at the Vienna Center for Quantum Science and Technology (VCQ) at the University of Vienna and the Institute for Quantum Optics and Quantum Information (IQOQI) says that quantum physics will enable remote users of such facilities to send and receive private data, safe in the knowledge that it is protected from prying eyes.

"The actual computation is measurement-based: the processing of quantum information is implemented by simple measurements on qubits. The user tailors measurement instructions to the particular state of each qubit and sends them to the quantum server.