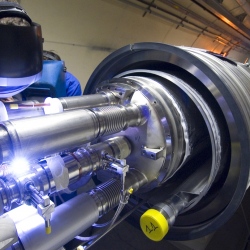 "It’s a very curious time in high-energy physics," says Michael Peskin, a researcher at SLAC National Accelerator Laboratory in California. On the one hand, researchers have just made the most significant discovery in decades: In July of last year, they announced they had found the Higgs particle at a collider in Switzerland. The Higgs is part of the mechanism that gives mass to everything. It is so fundamental that without it, we wouldn’t exist.

But at a time of intellectual highs, researchers are facing an economic low. Research funding is being squeezed by the economic crisis. The United States’ main particle accelerator, the Tevatron, shut down in 2011.

Earlier this month, hundreds of high-energy physicists gathered in Minneapolis to discuss the future of their field. "Somehow we have to figure out how to put our dreams together with the reality," he says.

High on the agenda is a new collider to study the newly found Higgs particle. The Higgs was discovered at the Large Hadron Collider, a 17-mile underground ring that smashes protons together with an incredible amount of energy. The LHC is the perfect machine for finding the Higgs because when protons crash into each other, they create sprays of different particles, including the elusive Higgs.

But to study the Higgs in depth — and to produce only Higgs — researchers need to smash electrons and anti-electrons together, and this can only happen inside a new kind of collider.

That machine is expected to cost $8 billion, which means there can only be one. "What you want to do is have all nations contribute to a single project," Peskin says.

At the moment, that global project is likely to be built not in the U.S., but in Japan. The Japanese government is looking at the collider as part of a broader economic stimulus package, according to Lyn Evans, who heads the Linear Collider Collaboration, the global group that designed this new machine. But Evans says they won’t build it if other countries don’t pitch in.

"The problem is going to be convincing the U.S. government that they can find a pot of money in order to support this Japanese initiative," he says.