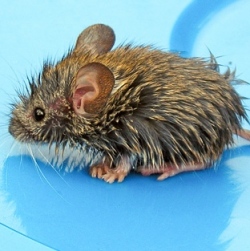 Aging mice can be made "young" again, according to findings one scientist initially found unbelievable.

The key is muscle-derived stem cells, which—like other stem cells—are unspecialized cells that can become any type of cell in the body.

When injected with muscle stem cells from young mice, older mice with a condition that causes them to age rapidly saw a threefold increase in their life spans, said study co-author Johnny Huard, a stem-cell expert at the McGowan Institute for Regenerative Medicine in Pittsburgh.

"I’ve been doing science for the last 20 years," Huard said. What "makes the story so amazing is that in the beginning, I didn’t believe the result," he said.

"I bet that we mixed up the animals—you know, scientists are always skeptical."

The study mice were genetically engineered to have a condition similar to a rare human syndrome called progeria, in which children age quickly and die young. (Learn more about the human body.)

When scientists looked at the muscle stem cells of the fast-aging mice, they found what Huard called "tired" stem cells, which don’t divide as quickly.

The team then examined mice that had aged normally and found their stem cells were similarly defective.

Curious if these deficient stem cells contribute to aging, Huard and colleagues injected stem cells from young, healthy mice into the fast-aging mice about four days before the older animals were expected to die.

To Huard’s astonishment, the treated mice lived an average of 71 days—50 more than expected, and the equivalent of an 80-year-old human living to be 200, he said.