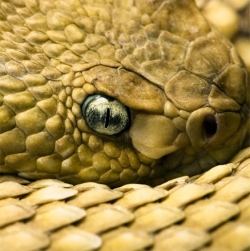 A new species of brightly coloured snake has been found in a remote area of Tanzania in East Africa.
The striking black-and-yellow snake measures 60 cm (2.1 ft) and has horn-like scales above its eyes.

The newly discovered snake, named Matilda’s horned viper, has been described in the journal Zootaxa.

The exact location of the new species is being kept a secret, because it could be of interest to the illegal pet trade.

Campaign group the Wildlife Conservation Society said the snake’s habitat, estimated at only a several square km, is already severely degraded from logging and charcoal manufacture.

The authors of the study in Zootaxa expect the viper will be classified as a critically endangered species.

They have already established a small captive breeding colony.