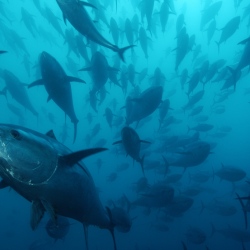 With all those coffee drinkers in the Pacific Northwest, it should be no surprise that human waste containing caffeine would ultimately make its way through municipal water systems and out to sea – but how will the presence of caffeine in our oceans affect human health and natural ecosystems?

The precise impacts that exposure to caffeinated seas may have on humans are not well known. However, related research indicates that evidence of caffeine contamination serves as a good indicator for the presence of other potentially harmful pollutants that have found their way into our waterways, such as prescription medication and hormones. The effects on aquatic life are also not well understood, but lab studies have already demonstrated that higher levels of caffeine in the water have been shown to produce cellular stress in intertidal mussels.

The study showing abnormal levels of caffeine in the waters off the Oregon coast also suggested that the contaminants were predominantly coming from small-scale waste treatment systems such as household septic tanks, as opposed to large-scale wastewater treatment plants, which are regulated with much greater scrutiny. Such massive facilities are well-equipped to process the waste originating from cities in Oregon, which are comparatively smaller than major metropolitan hubs that have much more waste to contend with. For example, in Massachusetts, high levels of caffeine have been detected in Boston Harbor, likely the result of significantly greater quantities of wastewater that require treatment than those present in Oregon.