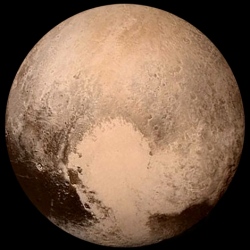 Two possible ice volcanoes have been identified on the surface of Pluto. They are seen in images returned from the New Horizons probe, which flew past the distant dwarf planet in July. The mountains are several kilometers high and tens of kilometers across, and each has what appears to be a depression in the top.

Unlike Earth volcanoes that spew molten rock, Pluto’s volcanoes – if that is what they are – would likely erupt an icy slush of substances such as water, nitrogen, ammonia or methane. The suggestion was raised at the 47th annual meeting of the American Astronomical Society’s Division for Planetary Sciences, where the mission team is presenting over 50 research reports from the flyby.

The scientists still need to do further work to confirm their volcano idea. What would help in particular is information on the composition of the materials making up the local terrain. "If we can constrain the compositions of these features then we’d have something to work with, with respect to modelling how this particular ice would behave if it were to be erupted volcanically, and what sort of relief it might be able to sustain," said Dr Oliver White from Nasa.

This information may come in due course. New Horizons has not yet returned all of its data from the July encounter. Only about 20% of its observations have so far been downlinked to Earth.