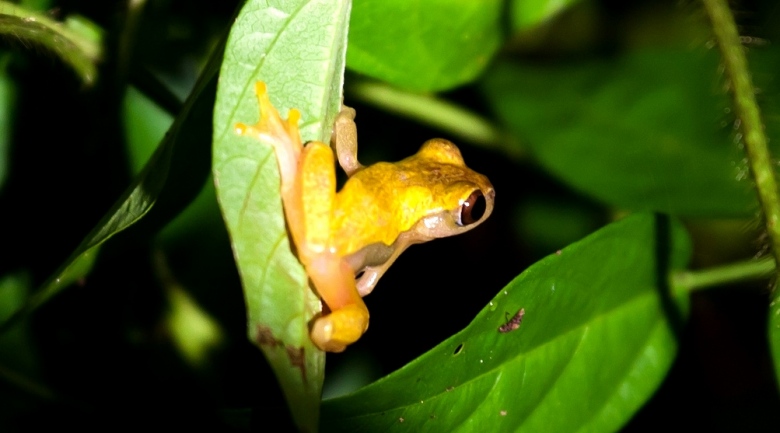 The frog, described in the journal ZooKeys, belongs to a species-rich group of frogs, the so-called rainfrogs that lack a tadpole stage, but develop directly as little frogs inside the egg.

The frog, that measures less than 2 cm, was discovered by Andreas Hertz and his colleagues, who are reptile and amphibian specialists at the Senckenberg Research Institute in Frankfurt am Main, Germany.

They discovered it in 2010 during several field trips to the Serranía de Tabasará of western Panama a highly understudied part of the Panamanian central mountain range.

“Although we recognized that the male mating call of this species differs from all what we had heard before and therefore suspected it to be new, much effort was involved to finally spot it in the dense vegetation,” Hertz said.

“When we finally caught the first individuals by hand, we noticed that it dyes one’s fingers yellow when it is handled. The scientific name of this new frog, Diasporus citrinobapheus, refers to this characteristic and means yellow dyer rainfrog.”

To assure the validity of the frog as a new species, the biologists studied body structure, coloration, molecular genetic data, and vocalizations of a series of individuals, and compared the results with the data derived from closely related species.

Additionally, the researchers took into consideration the possibility that the yellow stain may be poisonous and performed an analysis of skin secretions.

“We cannot say whether the dye is any good as a predatory defense, as we could not find any poisonous components. Maybe the color is just easily washed out and has no particular function. However, for now, this peculiarity of the new species remains enigmatic,” Hertz concluded.